Former ITDC senior executive, Prasoon Mukherjee has signed the first ever master franchise agreement for TGI Fridays’ for as many as 75 outlets in the next 10 years.

The U.S. based company has partnered with Master Franchisor, Universal Success Enterprises, to bring an authentic Fridays experience to over 75 new locations in South and Southeast Asia over the next 10 years. The deal, which is expected to drive over $500MM in revenue for the U.S. based company over 10 years will be headquartered in Singapore, is the most significant development agreement to-date for the brand. 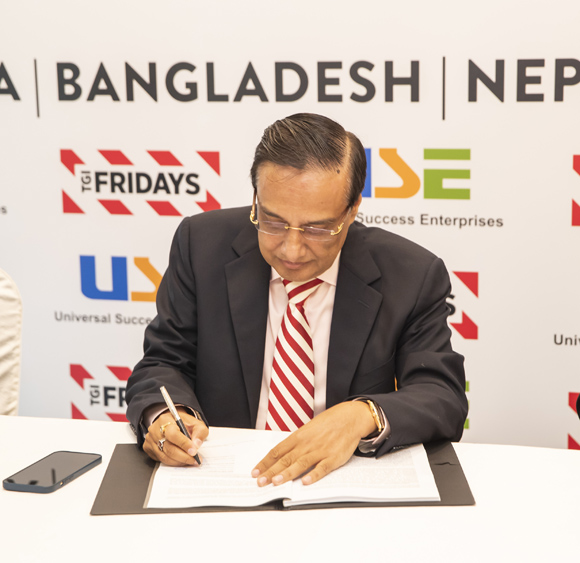 This latest development deal is core to TGI Fridays’ strategic global expansion strategy – as growth of the casual restaurant category internationally continues to thrive. And with 385 franchised restaurants in over 51 countries – including 22 new locations opening in 2022 alone – the brand’s recipe for overseas growth is rooted in its DNA.

“We’re thrilled to bring the TGI Fridays brand – and experience – to new markets and consumers in Asia through our expanded partnership with Universal Success Enterprises,” said Ray Blanchette, Chief Executive Officer at TGI Fridays. “Universal Success Enterprises is a valued partner – their deep experience in the marketplace and proven track record of excellence with TGI Fridays coupled with our successful local market approach will ensure the brand – and our menu offerings – are relevant to consumers.

TGI Fridays is seeing unmatched growth worldwide – with same store sales growing at an average of 23% globally – while brands like Pizza Hut and KFC are seeing same store sales rise to the tune of just 10% according to Restaurant Business. The reason – the brand is leaning into its roots globally providing TGI Fridays favorites like the brand’s Big AF Burgers in the Middle East to consumers hungry for iconic American flavors and taste experiences. And the brand’s offerings at its 75 new locations will be no exception.

In an exclusive interview with Destination India, Prasoon who was born and educated in Kolkatta, trained in ITDC in Delhi, and then moved to Indonesia and Singapore, said he was humbled with the first ever master franchise that TGI executed with a single company. The agreement visualizes 55 properties in South and South East Asia, with another 20 within India. TGI Fridays’ has three outlets presently, one each in Hyderabad, Bengaluru and Kolkatta.

Prasoon said TGI Fridays’ has for the first time signed for such a large territory, wherein 20% of the outlets USE has to develop themselves while the balance can be with third parties. The territory includes Singapore, Bangladesh, Indonesia and Vietnam, among others. Considering his Indian roots, Prasoon said that while the financial headquarters will remain in Singapore, the operations HQ will be in India, in either Kolkatta or possibly in New Delhi.

Among his priorities is a flagship outlet in the capital, as over a period of time, the chain had closed its outlets especially hit during Covid, and with the closure of shopping malls. The company has two modules, one of 2000 sq ft and another of 3000/4000 sq. ft. Prasoon said he would not like to go for very large format outlets like 8000 as they lack sustainability. His preferred locations would be CBDs and leading hotels in the metros. He also saw huge potential in Tier 2 cities and would be actively scouting for locations. His track record underscores the confidence that the Dallas HQ company has shown in Prasoon, it augurs well for the brand in its new growth story within India.

As the world’s first casual bar and grill, TGI Fridays is said to be the birthplace of fun, freedom, and celebration, bringing people together to socialize and experience “That Fridays Feeling™” a sense of celebrating the fun in everyday moments, big and small. For over 50 years, Fridays has been lifting spirits around the world with nearly 700 restaurants in 54 countries, serving high-quality, classic American food and iconic drinks backed by authentic and genuine service.

Universal Success Enterprises, headquartered in Singapore, is also core to the brand’s expansion strategy. The multinational company has a proven track record within the restaurant industry in Asia, introducing new restaurant brands and concepts to the region. The company previously introduced Outback Steakhouse to key markets in Southeast Asia including Singapore, Malaysia, Indonesia, Thailand and Philippines.

With operations in South and Southeast Asia, USE’s diversified businesses include projects within the real estate development, renewable energy and hospitality industries. Founded in 2000 by Chairman Prasoon Mukherjee, the company is the largest developer of real estate in Eastern India – with more than 10MM square feet of developed properties within the region. It owns logistics and business parks, school buildings and retail. The company’s past and present partners are world renowned corporates, including Ascendas of Singapore, Salim Group of Indonesia, Blooming Brand and TGI Fridays of USA, DLF, Shapoorji Pallonji Group, TVS Motors, Podar and Narayana Educational Institute of India.