OTAs Strengthen Outreach of the Travel and Tourism Product; Growth Inevitable as the Consumers Show Irreversible Passion to Travel.

by DI BureauSeptember 23, 2022September 23, 2022Leave a Comment on OTAs Strengthen Outreach of the Travel and Tourism Product; Growth Inevitable as the Consumers Show Irreversible Passion to Travel.

In this research paper, the author outlines the changing contours of the Indian travel product and the envisaged growth in the immediate times ahead.

At the heart of the Indian online travel story lies its burgeoning middle-class. With nearly 166 million middle-class households in 2018, it is expected to rise to 330 million by 2030. Indian travelers took approximately 1.8 billion domestic and 26 million international trips in 2018. In the last few years, improved infrastructure enabled Tier-2, -3 and -4 markets to join the online travel bandwagon.

In 2021, India had a humongous smartphone user base of 750 million and it is expected to reach one billion by 2026. This, coupled with better Internet connectivity, and a 17.8% increase in per capita GDP, sets the stage for the rapid growth of online travel.

The Indian online shopping and payment ecosystem leapfrogged in the years of pandemic. Launched in 2016, the Unified Payment Interface (UPI) democratized mobile-led transactions in India. In FY22, Indians made over 46 billion transactions through UPI, worth over $1 trillion. This year, the government also announced plans to allow credit cards to be linked to UPI. In 2021, only 3% Indians owned a credit card, which increased to 5.5% by 2022. In July 2022, there are 80 million credit card holders in India.

In the years of pandemic, the travel bucket list became the foremost aspiration as the notion of fickleness of life sank in. The pandemic fundamentally altered some critical attributes of consumer behavior. Indians historically averaged two to three trips a year, which has grown many-fold, especially in the urban scenario. Behavioral trends such as revenge travel, FOMO and YOLO, pushed consumers to make the most of travel time. The typical weekend getaways are now being extended to four or five days.

India’s domestic air passenger activity has recovered to 85% of its pre-pandemic levels. During January to August 2022, 78 million passengers flew on domestic routes as compared to 91 million during the same period in 2019. The full recovery on the international sector is still distant—eight million passengers took outbound flights between January and March 2022, compared to 64 million during the calendar year 2019. According to the recent India Travel Market Report by Phocuswright, the total Indian travel market stood at US$19.1 billion in 2021 and is expected to reach $40.4 billion in 2025, with online penetration reaching 58% in 2025.

Government policies have also helped boost the domestic travel sector. The Ude Desh ka Aam Nagrik (UDAN) scheme aims to boost aviation infrastructure in Tier-2 and -3 cities. The number of airports in the country increased from 74 in 2014 to 141 in August 2022. Over 400 new routes have been initiated under the scheme.

There’s a significant dynamism in the Indian air segment. Indigo continues to maintain its leadership in the domestic market, even as Go First eyes an IPO. New airlines (Akasa Air) and the return of old ones (Jet Airways), along with the privatization of Air India will potentially reinvigorate the aviation sector in India. Furthermore, with brands across the three different categories—Air India as an international full-service carrier (FSC), Vistara, another FSC, catering to the domestic and regional demand and Air Asia India & Air India Express tapping into the LCC opportunity—the TATA group is now truly aligned with the future prospects of the India aviation sector.

Rail and bus are the lifeline of mass transport in India. Gross bookings for Indian Railways reached $5.8 billion in FY22, nearly tripling compared to FY21. Thanks to the pandemic-induced DIY behavior, more than four in five rail tickets are now booked online.

The Indian hotel market is immensely fragmented. According to industry estimates, India has a supply of over 2.5 million keys, of which the share of branded /chain supply only accounts for high-single digits. The online penetration in hotel segment is relatively low because of this high fragmentation which creates a fertile ground for OTAs, enabling them to account  for upwards of three-fourth of the online hotel market share in India. 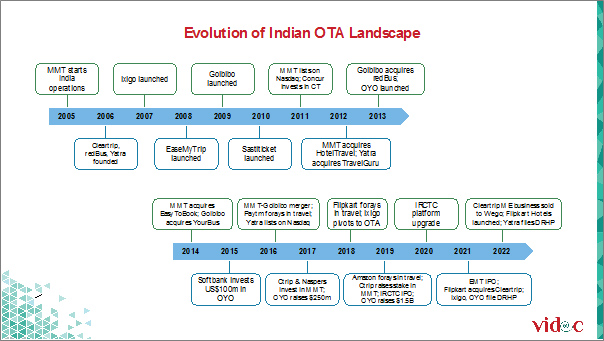 E-commerce in India began with travel, and it continues to be symbiotic with the aspirational Indian consumers. The OTAs have led the online travel category for the last 15-18 years and are primed to catapult the next wave of online travel growth. Rail, hotels, and alternate accommodation continue to be emerging segments for OTAs. There are five major full-service OTAs in the Indian travel ecosystem, and, each of their play and positioning needs to be understood to get a true picture of the Indian OTA landscape.

In The Age of Consolidation, Leading from The Front

The last decade was defined by business consolidation across categories and markets, with the leading players widening their lead, and growing both vertically and horizontally. Globally, Booking Group, Expedia Group and Trip.com (formerly Ctrip) are shining examples of this trend. Joining them from India is MakeMyTrip (MMT).

The OTA story truly began in India with MMT. Founded by Deep Kalra in 2000, it started with operations in the US, catering to travel needs of the Indian diaspora. Five years later, it started operations in India and went onto become the first Indian travel company to be listed on Nasdaq in 2011.

Goibibo, founded by Ashish Kashyap, made its entrance in travel in 2009, becoming a major player within a few years. Goibibo acquired redBus in 2013 to enhance its product offering. The 2016 merger of MMT and Goibibo gave MMT depth of content and an access to a bigger consumer base.

The early days of OTA adoption were predominantly an urban phenomenon. During this time, it was common for OTAs to sell air tickets. The million-dollar question remained: “Indians buy air online. Why not hotels?”. The competitive OTA dynamics did two things—it took the OTA story to Tier-2 and -3 cities in India and helped grow hotels online.

Taking a leaf from the global OTA playbook, MMT is now doubling down on products along the lines of fintech, pioneered by Hopper, a US-based OTA. With TripMoney, MMT aims to provide its customers a “book now pay later” option for flights and hotels, and to cross-sell and upsell products across consumer loan, bite-sized insurance, and forex cards.

MMT, leveraging its learnings from the emerging market OTA playbook, is setting up operations in the Middle East with a full-blown OTA proposition for Saudi Arabia. A large Indian expats pop in the region will certainly be to its advantage.

From Product Superiority to a Platform-led Play

Marketplace sites and leading ecommerce players such as Amazon, Flipkart and Paytm have been eyeing the Indian online travel opportunity for years. With higher usage frequency, engagement, stickiness and wallet connectivity, horizontal ecommerce platforms score more than any verticalized travel application. The travel category was considered a natural progression for them.

Ergo, Flipkart, India’s homegrown marketplace, acquired Cleartrip in 2021 to give a fillip to its travel vertical, and an access to Cleartrip technology and content. With the new partnership, Cleartrip, which was known for its clean interface and product-level innovation, could potentially leapfrog its development because of its access to Flipkart’s resources and engineering. In 2021, Flipkart sold Cleartrip’s Middle East business to Wego.

The Underdog That Survived Major Competition, and Thrived

Started by three brothers—Nishant, Prashant and Rikant Pitti—in 2008, EaseMyTrip is a fascinating story that withstood cutthroat competition in the Indian OTA landscape. While it remained a self-funded company, it eventually managed to have a successful public listing in March 2021 on NSE, in the thick of the pandemic, which again was quite remarkable.

While air brings in 90% of its GMV, EMT is embracing non-air opportunities as well.

EMT, which began as a B2B operation–and still retains its network of 42,000 agents–has now transitioned into a predominant B2C online business. EMT has also expanded operations to the UAE, UK, US, Philippines, Singapore, and Thailand.

A Pioneer That Persevered

Launched in 2006, Yatra was the second largest OTA in India at that time. Yatra, which means travel in Hindi, had a deep and immediate connect with the Indian audience and high brand recall.

In 2017, Yatra acquired corporate travel service Air Travel Bureau (ATB) to tap the corporate travel opportunity in India. The company recently launched a meta search tool to enhance the UX of their corporate travel platform. In June 2022, Yatra had a large base of 740 large corporate clients and over 50,000 small and medium enterprise clients using its corporate booking tools.

In its journey, Yatra has kept its eyes focused on the Indian market, maintaining that there’s enough room to grow here and that they are not interested in international expansion. It got listed on Nasdaq in 2016 and is now eyeing the Indian bourses. It filed its DRHP in March 2022.

Pivot and Innovate – The Underpinning Elements in Entrepreneurship

ixigo is a perfect start-up case study, entailing both pivot and innovation. Initially, a metasearch engine, it soon realized the limitation with the meta model in their ability to grow and to service the customer end-to-end.

An epiphany in 2017 made them realize that even though rail has been the backbone of transportation in India, it was largely an underpenetrated segment for the OTAs. In 2018, ixigo turned its lens on the air and rail segment. The pivot allowed ixigo to tap into a consumer market in India that had thus far remained uninitiated to flights. ixigo helped build the category by penetrating the Tier-3 and -4 cities in the country. According to their August 2021 DRHP, ixigo accounted for 42% of all train bookings made through OTAs. With an average 24 million people traveling by train in India every day, and eight million by bus, in pre-COVID times, the potential for growth remains substantial.

ixigo recently acquired ConfirmTicket (which has a stronghold in train bookings) and AbhiBus to bolster their market offerings in rail and bus categories respectively.

What The Future Holds

India is in the midst of a tremendous infrastructure development drive. The country is expected to spend $1.4 trillion in 2019-23, a massive undertaking which will create new opportunities for channels across the board to expand their footprint and increase revenue. As a result, the rail, air, and hotel segments are all likely to witness quantum gains as a variety of large-scale projects are completed.

With travel set for a full recovery in India in 2023, the only way OTAs can go is up. A new dimension to the OTA growth is super apps. A super app is slated to be the one app that consumers will use for everything: products and services, ecommerce marketplaces, financial services, ticket booking, gaming, ride-hailing, food delivery, utilities and more. While this is already pervasive in China, markets such as Singapore and Indonesia are fast catching up and have higher adoption as compared to the West. India has aspirants such as the Adani Group, Amazon India, Paytm, Reliance, Tata Group, and Walmart-owned Flipkart in building their own super app universe.

The popularity of staycations and workcations, coupled with the rise in the number of multiple short trips has contributed to the changing landscape of an industry with great promise. The trend of mini vacations might be here to stay. Millennials are lapping up the gig economy for the chance to live the digital nomad life.

In addition, with the young demographic looking at holidays and generally their lifestyle choices with a difference, the landscape of travel in India is set to become diverse and layered. OTAs are getting ready to play a larger role in the growth of the total and online travel opportunities in India, and their story ahead is only going to be more exciting.

VIDEC is a boutique research and analytics firm focused on the travel, tourism and hospitality industry. Its services include research & data analysis, consulting, due diligence and industry thought leadership. 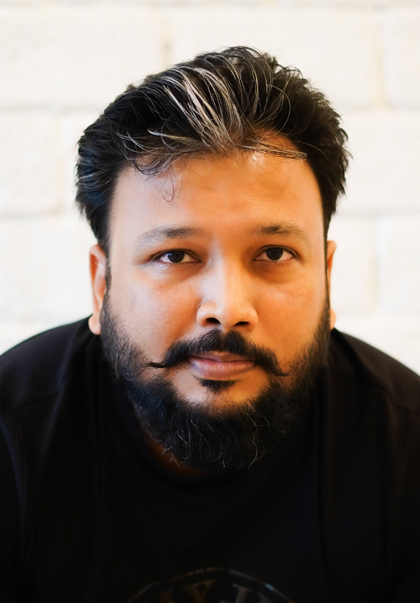 Viren is deeply tuned into building businesses, scaling and expanding them. With four startups in his kitty, and more than a decade of experience in management capacity in MNCs, he is a serial entrepreneur with a proven track record in research, strategy, consulting, events, media and education.