Year 2020 has been the Worst Year for Indian Hotel Industry, and Continues its Negative Growth, says Horwath Study

The industry, surveyed over the first six months of this year, shows a near ICU state of affairs for the industry. This report argues that urgent steps are needed for the industry’s resuscitation!

In this report we present an analysis of hotel performance in India for the half year Jan-June 2020. All comparisons are with H1-19 or Q1 and Q2 of 2019, as relevant.

If 2019 was the best performing year (among the last 10 years) for India’s hotel sector, 2020 has been the worst in living memory; unfortunately it appears likely to continue down the negative path for rest of the year. Growth achieved in 2019 augured well for 2020; but who knew that the world would be trapped in a pandemic that virtually stopped everyone and most economic activity in its tracks. The severity of impact for India’s hotel sector is best reflected by lost rooms demand and revenue, as summarised below:

The aggregate loss for March to June 2020, compared to 2019, is Rs. 48.1 bn (Rs. 4,810 crores). Note that mid-March 2019 to May 2019 was impacted by the elections, so that the effective loss in 2020 is likely a larger number. Note also that several hotels saw demand decline in February; some even from the last week of January – losses in those months would add to the revenue dilution for H1-20. Further, the revenue loss estimate is based only on hotels participating with STR (mostly chain-affiliated hotels); the loss will be larger when independent hotels are also considered.

Jan 20 saw 8% demand growth; however, YoY RevPAR growth was only a nominal 1% as some markets started experiencing demand withdrawal mainly from the China based travel. Feb 20 was in negative territory on all parameters when compared to Feb 19; yet, the wider expectation was that virus scare would be somewhat localised, and not global, and the slowdown would be contained. But the world was in for a severe shock as the virus didn’t peter out – instead it cast a pall of gloom, and has created the worst global crises for the hotel and travel industry.

YoY occupancy declined by 30% in the first 2 weeks of March. The fall was steeper post lockdown effective 24 March 2020 resulting in 56% YoY decline in RevPAR for Mar 20. And with an extended lockdown, Q2-20 was a disaster.

For the sake of record, the performance numbers are summarised below. That these are record low numbers is self-evident. 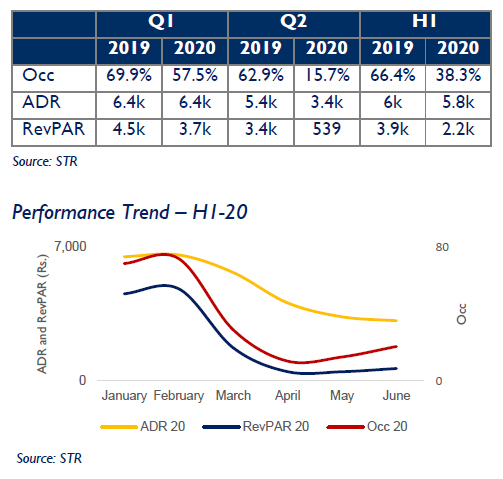 Several hotels have temporarily closed down; others have significantly scaled down operations. Full or partial closures continued as lockdowns were extended and divergent travel protocols inhibited resumption of operations even in June (in fact, even to date in several key markets). Lockdown period demand has been a mix of quarantine support, healthcare persons, international travellers awaiting repatriation, some corporate demand for critical employees, and some long-stay custom. A smattering of demand for senior citizen support, crew rooms and some personal travel in June added nominally to occupancy. The expectation of demand for staycations and leisure has materialised, but only in August, as varied travel regulations and state policies discouraged travel in June.

Most demand during the late March to June period this year has been rate controlled – luxury and upper upscale hotels have therefore seen a hefty dip in ADR from an absolute numbers viewpoint. The rate decline for upscale, mid-priced and budget hotels has been somewhat smaller in absolute numbers; however, the relative scale of loss has been equally material – and often crippling.

Thus, demand decline in the March to June period for the luxury-upper upscale, upscale and up-mid, and midscale-economy segments was 49%, 46% and 44% respectively. Room revenue loss for these segments, compared to 2019, is estimated at Rs. 27 bn, Rs. 15 bn and Rs. 6 bn respectively.

Hotel revenues also comprise F&B income from restaurants and outlets, from banqueting and meetings and other operating income. F&B and banqueting have been devastated during the lockdown period – the summer wedding season vanished, conferencing and events demand disappeared, and F&B spends from leisure and entertainment have yet to reappear as governments disallow normal functioning of restaurants and bars. Horwath HTL estimates the F&B and other operating revenue decline in this period (March through end June) at about Rs. 32 bn (Rs. 3,200 crores).

In aggregate therefore, the revenue loss for the March to June period is a massive Rs. 80 bn (Rs. 8,000 crores); this loss could likely increase by 180% to 200% when non-chain hotels are also included in the estimation. At 30% EBITDA margin, the loss is more than the interest burden on outstanding loans of the industry – Rs. 420 bn (Rs.42,000 crores), borrowing per estimates by the banking sector and another Rs. 50 to Rs. 80 bn from NBFCs, ECBs and other sources. If the sector has been so severely impacted at an aggregate level, the impact on debt service by individual borrower entities is even more massive.

The magnitude of the challenge grows when we note that Q2 is typically the second slowest quarter every year; continued business softness for Q3 and lack of positive outlook for Q4 can only amplify the criticality of the issue – unfortunately, there is lack of recognition that the industry is capital intensive by nature and yet very perishable as room nights lost every day are lost forever. 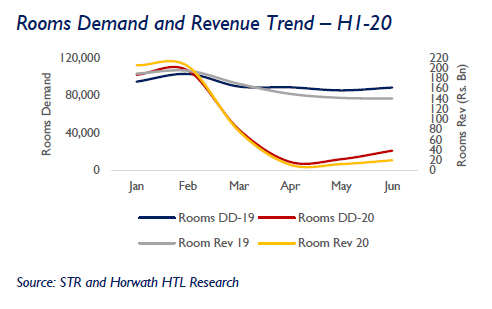 At the city level, H1-20 demand for six major metros declined 50-55% compared to H1-19; Gurugram demand declined by 57%, Pune by 63% and Ahmedabad by 42%. The smaller decline for Ahmedabad is mainly due to a tepid performance by that city in H1-19. The leisure markets of Goa and Rajasthan suffered 83% and 62% demand decline, respectively.

These are hard numbers and the reality; life-blood is not flowing through the arteries and veins of almost every hotel – restricted by varied closure regulations, and lack of travel confidence. When the blood flow stops, when oxygen levels decline precipitously, patients are normally put into good healthcare and ICU, for revival – they are cared for. They need support and timely attention which has not been forthcoming. One wonders how the pandemic containment programme would have worked if hotels were not around to support the varied needs. There should be significant concern what will happen to the lakhs of employees that will be stranded job-less because the industry sees multiple closures, lack of resource and abandonment of new projects.

STR is the source for premium data benchmarking, analytics and marketplace insights. We provide data that is reliable, confidential, accurate and actionable, and our comprehensive solutions empower our clients to strategize and compete within their markets. Our range of products includes data-driven solutions, thorough analytics and unrivalled marketplace insights, all built to fuel business growth and help our clients make better operational and financial decisions. STR is continuously working to enhance our product offerings while shaping the future of industries. We maintain a presence in 15 countries and collect data for more than 67,000 hotels across 180 countries. Founded in 1985, STR maintains a presence in 15 countries with a corporate North American headquarters in Hendersonville, Tennessee, an international headquarters in London, and an Asia Pacific headquarters in Singapore. STR was acquired in October 2019 by CoStar Group, Inc. (NASDAQ: CSGP), the leading provider of commercial real estate information, analytics and online marketplaces.

Horwath HTL is the global hospitality consulting brand of Crowe Global. Crowe Horwath HTL Consultants Pvt. Ltd. is a member of Crowe Global, an international network of independent accounting and consulting firms with 765 offices in 146 countries – ranked 8th globally. Horwath HTL has 47 offices in 36 countries across Asia Pacific, North and South America, Europe, CIS countries and Africa. In 2015, we celebrated 100 years of professional involvement in the hospitality industry. The consulting experience of our team in India, covers over 110 Indian cities, towns and destinations and 20 international destinations. Assignments have been undertaken for hotel chains, promoters, development companies, private equity investors and international lenders.