by Navin BerryMarch 25, 2022March 25, 2022Leave a Comment on TAAI Goes to Colombo to Bring a Fresh Momentum to Regional Tourism; Hosts Promise a Memorable Convention

It’s a bold Move by TAAI and president Jyoti deserves full credit for going that Extra Mile. It’s a bold new Beginning for Regional Tourism, in the post Covid era. 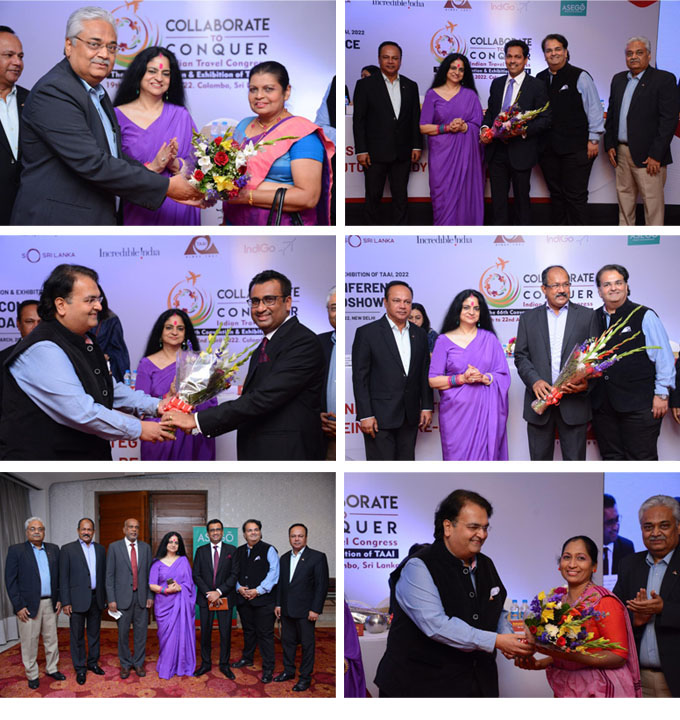 The 66th annual TAAI convention will he held third week April in Colombo. At a press conference to formally announce the event and to launch its logo and brochure, president Jyoti Mayal stressed how this will multiply tourism between our two countries. “We have observed wherever our conventions are held, that city or country witnesses a sharp jump in its tourist traffic”, she said.

This is a momentous time and opportunity to build regional tourism. At a time when covid is playing hide and seek across countries, when travel remains a somewhat uncertain commodity, when the war rages in our key generating markets, it is a time to rely on known and close by destinations. We have witnessed the resilience of our own domestic markets, and this benefit can easily get extended to within the region.

“Our PM has a twofold emphasis – on tourism and neighbourhood first”, affirmed Rupinder Brar, Additional DG Tourism, Government of India who was guest of honour at the launch ceremony. She highlighted the importance of this initiative, hoped it will identify new tourism circuits that encompassed the region and increase volumes for all of us. Brar extended full support for this event. Her presence gave strong confidence to industry building bridges with support from government. Together, they are destined to grow.

Mayal has taken a bold step to take the convention to Colombo, a development that augurs well for regional tourism. She has built a strong network of support for this event, a fact that was underscored by the Sri Lankan hosts. In times like these, it is gutsy to go this far, but she has taken up the challenge and promises to deliver a most memorable convention for all to remember. She does not miss this event as an event to grow the business, not just make merry. A lot of effort is being made to ensure content and discussion on the way forward.

Both Sri Lankan Tourism and Sri Lankan Airlines made elaborate presentations on their future hopes on the Indian market, shared how the tourism and airline products have matured. UL has been a prominent player in the Indian skies, and hoped to be back in full strength as the world recovers after the covid stress of the last two years. Given the size of the Indian domestic and equally the Indian outbound, given the present numbers of Indians going to Dubai, Singapore, Thailand and Malaysia, everyone agreed that numbers to Sri Lanka left much to be desired. The island nation had everything going for it, as a great value for money destination, the chief movers of the convention were of the view that this convention should mark a new beginning.

At present indications, the delegate count looks like crossing all expectations. We gathered that given the current enthusiasm it may well touch 800! This would be a big statement of positivity and hope, signalling that covid times may well be behind us. Like the rest of the world, in all our endeavours, looks like travel and tourism is equally beginning to live with covid.

Thilak Weerasinge, president, SLAITO (Sri Lankan Association of Inbound Tour Operators), the supporting body for the convention, expressed his hope that the convention will be a milestone in improving two-way traffic between our two countries. Responding to a query on reported recent disturbances relating to oil and life in the city, Thilak said he did not visualise any challenge for tourists and neither for the convention. Tourism was number one priority for the country. Answering another query he shared how hotels in Colombo city were going full. “As at present, during the convention dates, all hotels are sold out to foreign tourists”, he said.

So, onwards to Colombo and to the TAAI convention, to discover the strengths of the destination for MICE tourism. With a dozen top hotels within easy walking distance of each other, with their own distinct attractions of local and international cuisines, pubs with ambience and an exchange rate that makes Indian rupee most valuable, there is much to discover in the country.