Politics Aside, The World’s Tallest Statue is an Incredible New Tourism Product for Gujarat and indeed for Indian Tourism!

by Namita MittalMay 24, 2021May 24, 2021Leave a Comment on Politics Aside, The World’s Tallest Statue is an Incredible New Tourism Product for Gujarat and indeed for Indian Tourism!

From times immemorial, tourism in India was largely associated with the Taj Mahal. Afterall, India’s ‘Monument Of Love’ hosts an average of 70 to 80 lakh visitors every year. But apart from the many others on the national landscape we, as a nation, have not been able to add newer tourism products, not as many as India merits. In the last year, however, India has become home to the world’s tallest statue – the Statue Of Unity. This striding statue of Sardar Vallabbhai Patel, is now a colossal tourist attraction and may be just one of the those tourism products, given the right impetus, will substantially add to India’s tourism industry, currently been shredded to bits by the covid-19 pandemic.

About The Statue Of Unity

The nearly 600-ft tall Statue of Unity stands proudly in Kevadiya, on the banks of the Narmada River. The project to construct the world’s tallest statue was first announced in 2010, by then Gujarat Chief Minister Narendra Modi. The foundation stone was laid three years later, in 2013. The statue was finally inaugurated by Prime Minister Modi on 31 October 2018, the 143rd birth anniversary of Sardar Patel.

The mammoth 182 metre high statue, nearly double the height of New York’s Statue Of Liberty, was designed by sculptor Ram Sutar, who is also a Padma Bhushan recipient, and his son Anil Sutar.

The statue shows one of the most prominent leaders of India’s independence movement, Sardar Vallabbhai Patel, ready to take a step, with his head held up high and a shawl draped over his shoulders.

It is a larger replica of a similar statue at the Ahmedabad Airport, also created by Ram and Anil Sutar. Anil Sutar tells us that an American historian from the University of Pennsylvania was instructed to choose a design for the statue. The historian went across India, saw several statues of Sardar Patel and then decided that the one at the Ahmedabad Airport best represented the values that Sardar Patel stood for.

“The posture and pose of the statue are a testimony to the strength and iron will of Sardar Patel. At the same time, the expression on the face exudes kindness and gentleness,” he further says. “We studied a lot of photographs of Sardar Patel before we came up with this design. We wanted to show him as a bold person, as a person who was taking strides, and a person who was determined to achieve some goal. This particular design also shows the typical way he dressed – with a kurta, a jacket, a dhoti and a shawl. We tried to portray him in a stance that represented everything he stood for.”

It took several teams to build the statue. The international construction company, Larsen and Toubro, worked along with Michael Graves and Associates and the Meinhardt Group to construct the statue.

Experienced structural engineers worked on the inner frame of the statue to ensure that it was sturdy, stable and could withstand earthquakes. The statue has been built to withstand wind up to 180 kilometres per hour, since Gujarat is a cyclone-prone area and experiences harsh winds in cyclone season. It can also withstand earthquakes, because Gujarat lies in a Seismic Zone IV (that is, Gujarat is prone to extremely massive earthquakes). The team of 60 sculptors, led by Ram and Anil Sutar, worked on the outer design of the statue.

Anil Sutar reveals to us that first, a smaller statue of 30 feet was constructed by the team together. All flaws were omitted for this smaller statue, all structural defects were corrected and it was then scaled up to create the actual statue. A detailed 3D scan was produced before the bronze casting work was started.

The statue is 182 m high, specifically to symbolise the 182 seats in the Gujarat Assembly. It has been constructed on a river island called Sadhu Bet and it overlooks the Sardar Sarovar Dam.

The statue is divided into five zones. The first zone is the area from the base of the statue to Sardar Patel’s shins. This includes an exhibition area, a mezzanine floor and a roof. It is also home to a memorial garden and a museum.

The second zone is from the statue’s shins to thighs. This is followed by the extremely popular third zone, which is from the thighs to the chest area of the statue. Near the chest area is a massive viewing gallery which can accommodate 200 people at a time. This viewing gallery provides jaw-dropping views of the Narmada River, the dam and the nearby Vidhyachal range.

The fourth and fifth zones are above the viewing gallery, comprising of the shoulders and head of the statue. These are for maintenance and are not open to the public.

Not just the statue, but the entire area has been designed in the form of a world-class attraction, with plenty to keep one entertained.

There is an exhibition hall and museum that educates one about the life of Sardar Patel and his contribution to India’s freedom struggle. It also offers a short movie on the tribal culture in the nearby regions.

The top-of-the-art laser light and sound show is a hit with the younger ones. It talks about how Sardar Patel unified over 500 princely states in pre-Independence India.

Apart from that, the Gujarat Tourism Board has also developed a Valley of Flowers close to the statue. This is a 17 km long patch of land covered with flowers, designed to look like a gigantic rainbow on earth.

Next on the itinerary can be a boat ride down the River Narmada. Apart from a spectacular view of the imposing Sardar Sarovar Dam, the one-hour boat ride takes visitors right up to Gujarat’s border with Maharashtra. 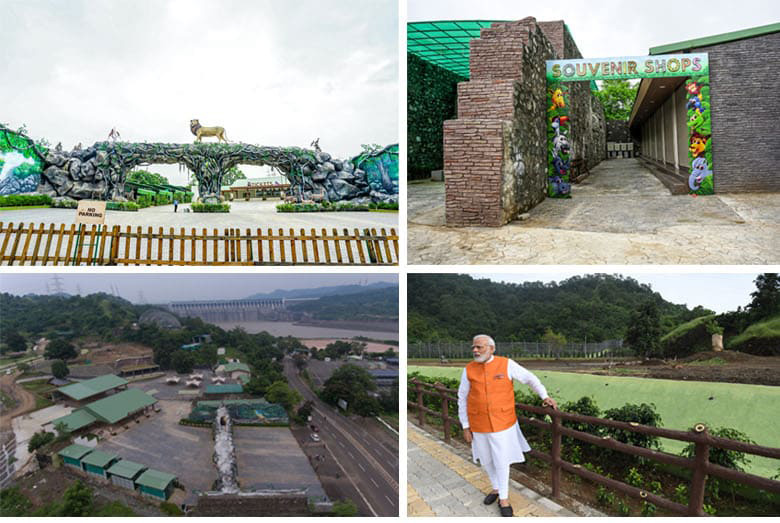 And lastly, for nature-lovers, there is a Jungle Safari. It is a zoological park sprawled over 375 acres of land, that is home to over three hundred species of animals including giraffes, zebras, leopards and many birds.

A crocodile park, a first for the state of Gujarat, is also being developed.

The Buzz Around The Statue

In order to keep the buzz around the Statue of Unity alive, the government has been periodically making big value additions to make the experience more visitor friendly.

First, the Prime Minister flagged off eight trains to Kevadiya, the hitherto unknown town in Gujarat that the statue calls home. The Prime Minister said, “The rail connectivity will not only bring comfort to the tourists but also change the lives of the Adivasi people of Kevadiya as it will create opportunities of employment and self-employment.” It is hoped that once the pandemic dies out, Kevadiya will welcome around one lakh tourists daily. One of these eight new trains, the Janshatabdi Express, will be a modern train with vista dome coaches that allow passengers uninterrupted views of the vistas around.

Next, came the seaplanes. India’s first seaplanes were launched in Kevadiya last year, on the 145th birth anniversary of Sardar Patel. These seaplanes can accommodate twelve passengers at a go and operate between Sabarmati and the Statue of Unity, representing a modern-day link between the two towering figures of Gujarat – Mahatma Gandhi and Sardar Patel.

Ever since its inauguration, the Statue of Unity has been attracting tourists in large numbers. Sardar Sarovar Narmada Nigam, MD, Dr Rajiv Gupta has said, “the town (of Kevadiya) has been developed as a tourist destination for the entire family while preserving its ecology and cultural heritage.” He further said that the Statue of Unity attracts more people on an average than America’s Statue Of Liberty.

Once the pandemic struck, the Statue was closed to visitors from March to October 2020. Once it re-opened, visitors were fewer, about ten thousand per day. However, these numbers shot up sharply around long weekends, holidays and around the New Year. The launch of the seaplane service, gave a further boost to visitors.

Experts expect that the Statue of Unity has the potential to lead the revival of tourism in India. People from the neighbouring state of Maharashtra are skipping the cliched getaways of Matheran, Mahabaleshwar and Panchgani, seeking a new experience, and instead making their way to Kevadiya to soak in the splendour of the Statue Of Unity.

Kevadiya is a shining example of how an average Indian town, that barely anyone knew about, was transformed into a global destination. Well built, concrete roads have replaced the dusty, patchy streets. New hotels are opening every now and then, providing employment to the local population. Youngsters are getting more enterprising and opening trendy cafes where Pav Bhaji and Pasta happily coexist on the menu.

The Statue of Unity is becoming a symbol of India itself – an imposing figure on the global stage, confident and calm, standing tall in the face of adversity. And it is this might, that can potentially herald a recovery of India’s domestic tourism, to begin with, from the pandemic, attracting thousands of tourists from India and abroad. It is indeed a symbol of India’s history with new tourism products for years to come!