Polish Airlines has reasons to be enthusiastic about its second foray into India, as it celebrates its 90 years of operation. And admittedly embarks on an ambitious goal of establishing itself as the hub of the European airspace for Indian flyers heading to Warsaw and beyond. Much has changed, in India and Poland, since the heady days of the 1990s, when the Polish carrier connected the two countries, later withdrawing from the Indian market. As it took to the Indian skies, once again, the CEO of the Polish Flag carrier was in the capital to announce the launch and interact with a select group of media personnel. He expressed great confidence in the Indian market, suggesting that the airline was open to linking more key Indian gateways to Warsaw, provided the two governments ironed out formalities concerning bilateral agreements. 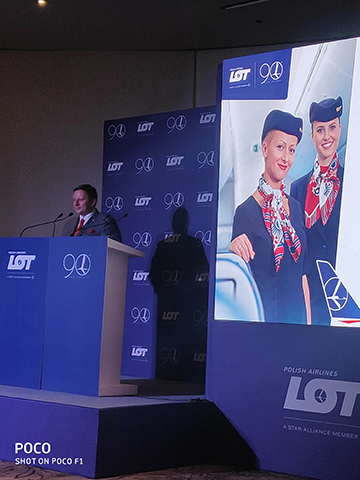 Creating awareness about the destination would be a greater challenge, however. Poland is a relatively unknown territory for the Indian outbound and while there is a visible interest in exploring new destinations among the outbound, Poland has not been marketed adequately. Perhaps, a concerted marketing outreach, involving stakeholders of the tourism business, led by Polish Airlines could address the challenge. A joint promotion campaign, involving countries such as Romania and Hungary may also be fruitful. It is expected that numbers to Eastern Europe will grow as the connectivity puzzle has been addressed. But the ambition of positioning Warsaw as a preferred hub for Indians heading to Europe and beyond will take more that direct air connectivity.

Keen on connecting more cities, the government need to iron out bilateral agreements

“We have to work on bilateral agreements before we can consider further expansion into other Indian cities. Of course, it is a matter between the two governments,” he said. He suggested that all four metro cities were “very interesting”, to name a few, among other cities, speaking on the possibilities of further expansion in the country. “India had a great future ahead because of the economic growth and rise of the middle-class,” he said. “India is already a real superpower and will certainly more so in the future. I think there will be many Indian cities that LOT Polish Airlines will connect in the next decade. We certainly hope that the readiness, willingness and eagerness to work with India will be met with open arms by our governments,” he said. LOT Airlines intended to connect countries transparently and efficiently, he noted, on the airline’s road ahead.

Batting for Poland, he argued that much of Western Europe had already been explored by the Indian outbound and, given its beautiful natural setting, architecture, hospitable people and comparatively milder climate, Poland was favourably positioned for tourism.

New airport for the future

The Polish government had decided to build a swanky new airport some 36 kilometres from the city centre, where the current airport was located, the CEO said, adding that the upcoming “global mega-hub” was going to have a capacity of handling 60 million passengers. “The airport, however, can handle 100 million passengers upon expansion, should the need arise, he added. “We have the land and infrastructure required to make sure that we can provide connectivity to all the significant markets throughout Europe. An unrestricted modern airport is going to be built in the next ten years, which, incidentally, coincides with the one-hundredth year of the airline’s operation,” he informed.

He insisted that he would do “everything he could”, in his capacity, to ensure that the Polish flag carrier flew to all continents and “every important aviation centre” as it celebrated its hundred years of operation in 2029.

Listing out important hubs for the carrier, besides Warsaw, he informed that Cracow had become a “very important hub” for the airline. He noted that the city was important for numerous reasons, primarily for being a treasure trove of European architecture and was going through a phase of discovery among the tourism fraternity, much like Prague underwent “7-8 years ago”. Mr Milczarski shared that the airline covered all bases in Poland and connected every major city through short and comfortable flights.

While the entire Central European region was critical and very well represented by the airline, its standing was best demonstrated in Budapest. “We share a very unique relationship with the government of Hungary,” he said, sharing that Hungary did not have a flag carrier. (The Hungarian national airline Malev was forced to go bankrupt after a decision by the European Commission which made its financial sustainability completely unviable). LOT Polish Airlines was the “de facto” flag carrier for Hungary and the airline was developing Budapest as a hub, the CEO said. “We already fly to JFK and Chicago from Budapest and are started a flight to Seoul,” he added, informing that several short-haul flights were also being introduced go connect cities with the Hungarian region and elsewhere in the European continent.

On the Indian market

The airline was going to operate Boeing 787-9 Airbus on the Delhi-Warsaw route and providing choicest Indian and continent cuisines, a Hindi-speaking crew and comfortable seating with lie-flat beds in the business class segment. Being a member of the Star Alliance, the carrier was in a code-sharing agreement with Air India, the CEO said.

LOT will be operating this route five times per week, making New Delhi its sixth destination in Asia.