IHM Pusa celebrates its 60 years with Aplomb! It is Time to Look Ahead!

by Navin BerrySeptember 22, 2022September 23, 2022Leave a Comment on IHM Pusa celebrates its 60 years with Aplomb! It is Time to Look Ahead!

It is a Moment in Time. IHM Pusa has made a sterling contribution to professionalism in the service industry, not just hospitality. It is time to look ahead and plan for the next 25 years.

With the Hon’ble minister for Tourism, Culture and North Eastern Region as Chief guest, IHM ushered in its 61st year of service to the nation and hospitality industry in particular. Several celebrity alumni who have done the country proud were in attendance. Many of the alumni have moved onto other service industries, not kept themselves to hospitality. The contribution of Pusa, ironically, has been therefore manifold, having contributed to across the service industry in the country and also globally. 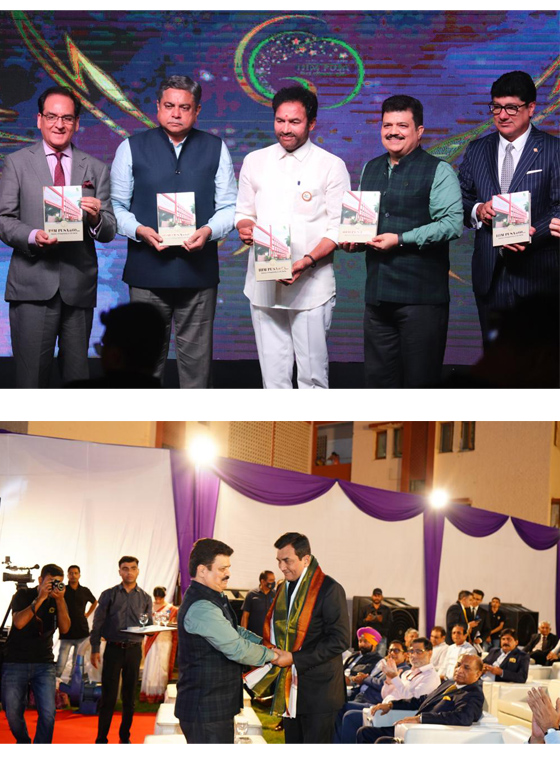 Secretary Tourism, Arvind Singh who is also chairman of both Pusa and NCRT academy, congratulated the alumni as well as the teaching academy for upholding such high standards over decades and producing some of the best talent in the country. He commented on how Pusa had become the torch bearer for other IHMs in the country. He was confident that Indian hospitality was in secure hands in the years to come, given the high levels of excellence among its academy and the enthusiasm of the students.

Minister Tourism, G. Kishan Reddy pointed out how the Indian tourism and hospitality had suffered the most during covid and acquitted itself in flying colours. He was happy to note that not one person in the audience was wearing a mask. This, he said, was a testimony to the fact that India was able to competently handle the challenge, thanks to the timely government interventions and the professionalism and dedication of our medical teams across the country. The Minister exhorted the students to be dedicated and committed to their studies and ensure they excel not only in India but also globally.

Puneet Chatwal, welcoming the dignitaries and guests, on behalf of the institute, fondly recalled his own days as a student, extolled how his groundings were built at Pusa and how he was able to carry forward his college learnings into his career. His has been an exemplary run, having trained at ITDC, moving internationally to the Radisson Group in Europe and then heading Steigenberger Hotels (now Deutsche Hotels) headquartered in Germany. He is presently heading Indian Hotels Company (IHCL) which includes the Taj, Vivanta and Ama brands, among others, and is the fastest growing Indian hotel company.

Principal of Pusa, Kamal Kant Pant, highlighted that the students were the mainstay, contributing to national occasions and challenges. He recalled how the students were able to provide meals on Indian Railways, on one specific occasion, till the contractor had been finalised, for a good six months. His students, he said, were always upto every challenge. They were looking forward to being a part of forthcoming events in the capital, and contributing to their success.

The evening saw the students do a variety of dance dramas, celebrating India’s rich heritage, with students doing an excellent job of compering and curating the evening. Somewhat marred by the occasional rain, students were in attendance with umbrellas providing cover for the distinguished chief guests. Supporting pavilions and booths from hospitality chains were in evidence to strengthen their support to their alma mater.

What is my take? Having walked through the corridors of the institute, sat through the celebrations, I would say it is time now for Pusa 2.0. In fact, this should have got initiated at least a decade ago, and one has to make up for lost time. Pusa needs a new location, an expanded canvass which is at least five if not ten times bigger! One that responds to the challenges of a 5 trillion economy. If we are to achieve these targets, India’s hospitality industry has a challenging task before it – the sky is the limit for growth. We will need easily ten times an output in terms of professionals across the value chain.

MoT, as the owning agency, with a plain speaking and most well-meaning secretary tourism Arvind Singh as its present chairman, this should be an immediate task to undertake. Given the enthusiasm shown by Minister Reddy, the task should be that much easier. We will need to jump the queue; it’s not Pusa 2.0 that we are looking at but the next few levels higher.

This would be a most befitting recognition of the achievements of IHM Pusa. The alumni is exceptionally well positioned to contribute.

One hopes this thought will be entertained and carried through, as the nation needs this! It is the need of our times!