by Sourish BhattacharyyaApril 18, 2021April 18, 2021Leave a Comment on “Aerocity has the promise of becoming Delhi’s most important business district”

The shadow of Covid is back to haunt the Aerocity, but its community of hoteliers and restaurateurs, having braved one lockdown and its after-effects, are convinced that this too shall pass. Their faith in the destination remains undiminished. To quote Sehgal of Andaz Delhi: “Watch out for the next phase of the Aerocity development. It is going to overshadow everything else in Delhi.” His sentiment is shared by Daryaganj co-founder Bagga. “The Aerocity is here to stay,” he declared. “It has the promise of becoming Delhi’s most important business district.”

“The demand for staycations has flipped our business model,” exclaimed Laroche, who’s the Director (Operations) overseeing the 19 Ibis and Ibis Styles hotels across the country, when we interviewed him for this story, before the most recent lockdown.

Consider the benefits. In just six years, the Aerocity, which was once, not long ago, a vast stretch of wild grassland bordering the Indira Gandhi International Airport (IGIA), has transformed into a beehive of branded hotels with 5,000-plus keys, a bevy of standalone and in-hotel restaurants and food courts, two nightclubs, tony shops and an expansive outlet of Future Group’s department store, Central, and additionally, more than 1.2 million square feet of office space in the three Worldmark Towers developed by Sunil Mittal’s Bharti Realty. “The Aerocity enables Delhi to compete with the best cities of the world,” Laroche said.

Add to the obvious people magnets the fact that Aerocity is an effortless drive away from South and West Delhi as well as Gurgaon – it has come closer because of the Rao Tula Ram flyover and the Dwarka and Vasant Kunj underpasses – and you know why staycation-seekers are keeping Laroche busier than he usually is. The Aerocity has become, despite last year’s lockdown, Delhi’s most popular multi-experience destination after Connaught Place. 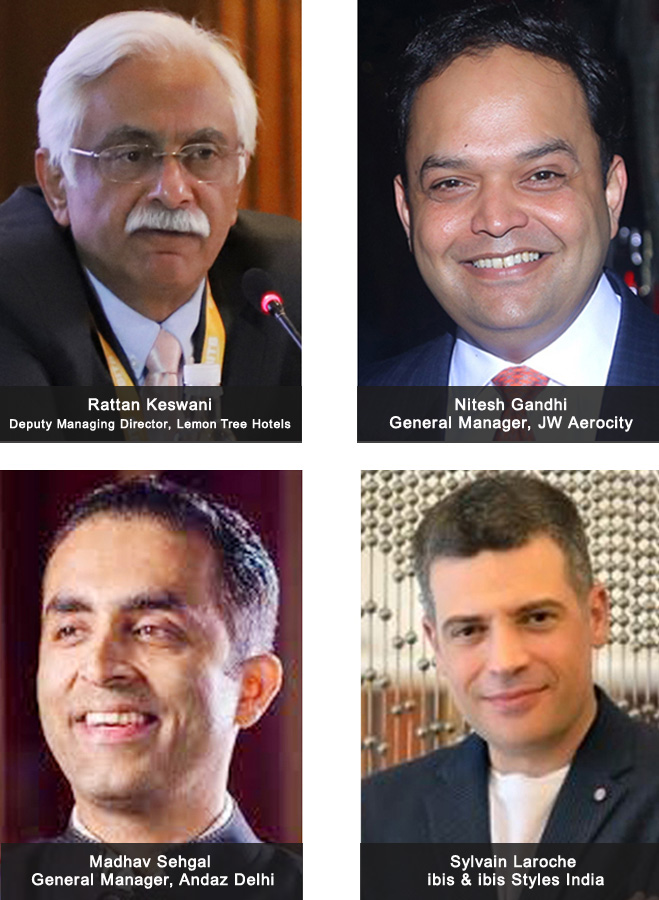 “There’s so much variety within a walk away,” Rattan Keswani, Deputy Managing Director, Lemon Tree Hotels, and Chairman, Carnation Hotels, said. He was sharing the perspective of guests checking in at Aerocity hotels. For hotel guests, the Aerocity’s 40-odd standalone restaurants offer safe and soul-satisfying alternatives to in-room dining. For restaurants, Keswani pointed out, there’s a clientele for the different cuisines on offer, because “the customer mix is very different from one hotel to another”.

Back in 2014-15, when the first Aerocity hotels opened, including the JW Marriott and Lemon Tree Premier / Red Fox, many observers believed the location could never come up against the more vibrant presence of Gurgaon’s Cyber City/Udyog Vihar clusters. Nitesh Gandhi, General Manager, JW Marriott, and Cluster Manager of Marriott International’s Rajasthan hotels, credits the success of Aerocity largely to the vision of the pioneers such as his hotel’s promoter, Sushil Gupta.

“He knew back then that the Delhi-NCR market was being under-served, especially in the MICE and weddings segment,” Gandhi said. “Subsequent developments have proved him right.” Before Covid restrictions came into force, Aerocity hotels were spilling over with conferences, product launches and weddings. Gandhi remembers the mammoth India Mobile Congress, which took place in October 2019. It ensured full occupancy at all the Aerocity hotels and created spillover business for F&B outlets and banqueting spaces. In the words of Laroche of Ibis, “When you create a new destination, you create new business opportunities.”

With global financial organisations such as the IMF and IFC, and international blue-chip companies such as Accenture, Boeing, E&Y and Grant Thornton moving into the Worldmark towers, the clientele for smaller conferences and meetings has grown steadily. Even with Covid restrictions in place, these companies are keeping the business of meeting rooms alive. “Aerocity hotels offer them a safe bubble in these uncertain times,” Madhav Sehgal, General Manager, Andaz Delhi, said.

For the early restaurateurs, too, the Aerocity has delivered its promise. When Saurabh Khanijo first saw the plans for the Aerocity’s lifestyle hub – now collectively branded as The Walk – he was at once transported to the Singapore’s triumvirate of Boat Quay, Clarke Quay and Robertson Quay (he could have also named the Marina Bay Sands), which are magnets for both the citizens of the island nation and international travellers.

“Tourists and passengers in transit are drawn to places,” Khanijo pointed out. His Aerocity restaurant, The Kylin Experience, in fact, popularised the brand in Chandigarh because visitors from Punjab, whether they are flying out from the IGIA or seeing off their dear ones, spend time walking around the Aerocity and dining in its many restaurants.

And it is absolutely safe to do so. Vishal Anand, a Farzi Café franchisee who was one of the first three restaurateurs to open shop in the Aerocity, emphasised that the sense of security the destination offered to visitors, especially women, was one of its biggest attractions. The others were its easy connectivity to Delhi and Gurgaon, “immaculate” maintenance, and the plentiful availability of parking space. To quote Sehgal of Andaz Delhi: “The Aerocity leaves a great first impression on anyone arriving into Delhi. It’s the new face of New Delhi.”

Elaborating on the easy connectivity, Anand said on weekdays, 20 per cent of his guests came from the neighbouring hotels and the rest from South and West Delhi. On weekends, the number of diners from Gurgaon goes up. And now, with people seeking out al fresco dining options because of the long shadow of Covid, Aerocity restaurants score big, because they have plenty of open spaces to offer. Anand’s landlord raised the open-air seating of Farzi Café from 40 to 60 seats. Other restaurants, too, have been looking outwards.

Avantika Sinha Bahl, who was also one of the first three movers when she opened Kampai at Worldmark I in 2018 (the other two were Café Delhi Heights and Farzi Café), was drawn by the concentration of offices of top Japanese companies, notably Sumitomo, Mitsubishi, Hitachi, Bank of Tokyo, JBIC and the Japan National Tourism Organisation. It also helped to have a cluster of hotels around her. Sinha Bahl said hotel guests ordering in food – in the days when the Aerocity’s peak hotel occupancies averaged 80-85 per cent – became an important revenue stream for Kampai.

Interestingly, when her Japanese clientele left India during the lockdown and did not return for quite some time, the young restaurateur was surprised to see that her “Indian customer base tripled” in the months that followed the return to normality. She soon fathomed why. “Delhiites who have not been able to travel abroad are coming to Kampai to satisfy their urge for Japanese food,” Sinha Bahl explained. It is the surge in Delhi footfalls, in fact, which had enabled Aerocity restaurants before the present wave of restrictions to counter the slide in the number of transit passengers because of the sharp drop in international flights as well as the dip in the corporate check-ins at the neighbouring hotels.

For Amit Bagga, who launched Daryaganj with his US-based business partner, Raghav Jaggi, at Worldmark I two years ago, it was his “faith in the Bharti brand” that convinced him to open his first restaurant in the Aerocity. Today, Daryaganj has grown to four outlets, but Bagga insisted that “since December 2020 our Aerocity restaurant has performed better than the other three”. The second big Covid surge, though, has made it seem, to quote Keswani of Lemon Tree Hotels, the clock has turned back by five or six months.

Still, Bagga is hopeful. He believes that after India turns its back on the present surge, Aerocity will see better, brighter days. “Within two years, a massive retail hub is coming up in the vicinity of the Aerocity. That will generate a much higher volume of footfalls,” Bagga said. Added Sehgal of Andaz Delhi, brimming over with confidence: “The next phase of the Aerocity development will overshadow everything else.”

The location of the Aerocity comes with its unique advantages. During the lockdown last year, for instance, IT companies in Gurgaon turned to Aerocity hotels for a service that only they could deliver. Hotels such as Lemon Tree Premier / Red Fox became hubs for IT companies, especially those in the business of managing sensitive data.

“Work from home (WFH) is not as easy as it seems,” explained Keswani. “All employees of a company may not have a spare room to turn into a home office. Then there are security concerns. IT companies handling sensitive data do not like to spread their networks across residential neighbourhoods. It makes more sense to them to cluster their employees for three or four months in the secure confines of a hotel.” Aerocity hotels, to quote Laroche, became “sanitised offices” during the lockdown.

In the lockdown days, and even later, proximity to the international airport benefited Aerocity hotels in another major way. Lemon Tree Premier and Ibis, for instance, saw a steady movement of foreign nationals who were being evacuated by their embassies. They would stay overnight before taking a flight out of IGIA. “We were thus able to recover the operational cost of our rooms,” Keswani said.